Yam & Banana is a record label and production collective founded in 2013 by Dan aka Ominous and Uri Green. Yam & Banana are currently the in-house producers at the Dadaras Studio in St Pauls, Bristol, UK. They have produced, recorded and/or mixed artists such as Jah Garvey, Norris B, Mad Sam, Beres Brown, Daddy Freddy, Potential Kid, Gully Bop, Jay Da Bigman, Splitz P, just to name a few. With a sound rooted in the Jamaican and UK music scene, from bashment to roots passing through dubstep and grime, Yam & Banana sound is Heavy, Fresh, Serious and Soul-deep.

Born in Barcelona and moved to Bristol, Dubtime is a dj and producer who developed his own style after playing a different kinds of music. He become Dubtime after he fell into Reggae and subgenres like jungle, raggajungle, dub or dubwise. Since then he is been loyal to the Jamaican sounds.

His sets are characterized by the speed in the mixes, doubles drops, reggae vocals and the selection of the most original tracks, from classic roots anthems to the most energetic remixes of ragga-jungle and dubwize through heavy dub basses, the newest roots riddims or the digital reggae skanks.

As a producer, he has managed to gain reputation in the junglist scene with songs like Stand Up, his first public track remixing the recognized singer Nanci Correia, Unity and imperial His Majesty, ep released in the Mexican label LowFreq from Isaac Maya, ChattyChatty Remix featuring Karlixx, Sr. Wilson at the vocals and Barbass Sound, Real Music for the label of one of the pioneers of Drum’n’Bass in Spain, Kripton Industries or Strong & Free, remix for Dreadsquad and Kasia Malenda.

He is been playing all around Spain in cities like Granada, Seville, Cordoba, Almeria, Murcia, Ciudad Real, Valencia, Barcelona, Gerona, and much more. He also played in festivals like Rototom Sunsplash for 2 consecutive years in 2013 and 2014 or the SoundSystem Meeting 2014 alongside artists like Congo Natty, Tenor Fly, Serial Killaz, Nanci & Phoebe, Chuck Fenda, Vandal, Dreadsquad, Mooncat, Barbass Sound, J Bostron, Aries, Riddim Tuffa, etc…
Currently part of the djs crew in 12:34 Productions with J-Man or Kelvin 373 among others and stroll his shows for some of the greatest clubs in Bristol as Lakota, Cosies or Blue Mountain.

It was founded in 2007 from Skunk Selektah and Larubia Roots, and currently has a handful of years of amateur and professional career having been part of big big partys in all this time, and what remains …

As we advanced, currently the sound compose Larubia Roots, Sir Dakka and Kid Mix-A-Lot, third member in discord, operating directly from Bristol, UK, and creating all part of own production of Blood and Fyah, with riddims , full tracks, remixes and productions ranging from the stepper to the jungle; and theyr movement in Córdoba focuses on a shared scene with known local groups such as Potorro Sound, Barbass Sound, Bass4YaFace and other formations that form the family of reggae and rap in Cordoba.

With regard to national and international relations Blood and Fyah Sound has had a presence in renowned festivals as Rototom Sunsplash in editions 2013 and 2014 and have shared the stage with much of the cast of sounds and singers of the national scene.

As an initiative from the sound itself,, in early 2012 arises “JAM I CAN”, a strictly commitment for Jamaican sounds, culture and trends that is already giving a lot to talk about.

SO WE SAY BIG UP and BIG LOVE! 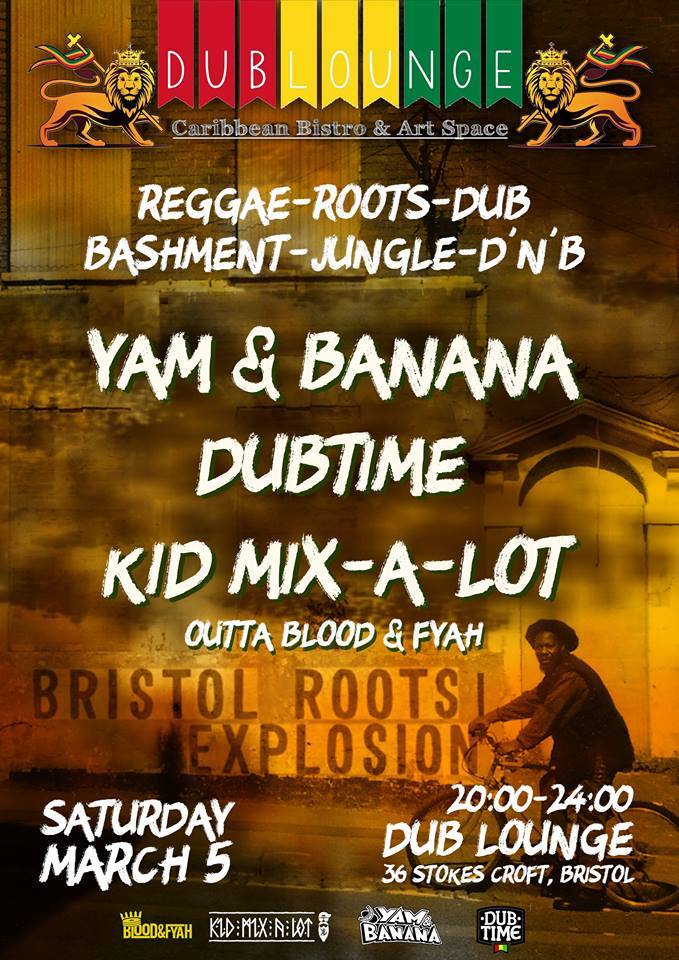